We’ve found the tastiest places in the UK to be vegan.

Veganism is a way of life that continues to rise in popularity. According to Plant Based News, 1.5 million people in the UK are following a vegan diet for the benefit of the planet and our own health.

With Veganuary around the corner, many of us may be feeling the need to make considerable changes to our diets and lifestyle in the new year (especially after a little festive indulgence).

Following the launch of the McPlant earlier this year, it looks like the veganism movement will continue to grow. Because let’s face it, if McDonald’s is â€˜lovin it’, then it’s probably not going anywhere any time soon.

With this in mind, we have conducted the dream study for vegan veterans and newbies to uncover the best cities in the UK for vegans.

From the number of vegan-friendly restaurants available to the average cost of vegan food in the area, no stones have been left unturned for the crowning of the UK’s plant-based royalty.

The best cities in the UK for vegans 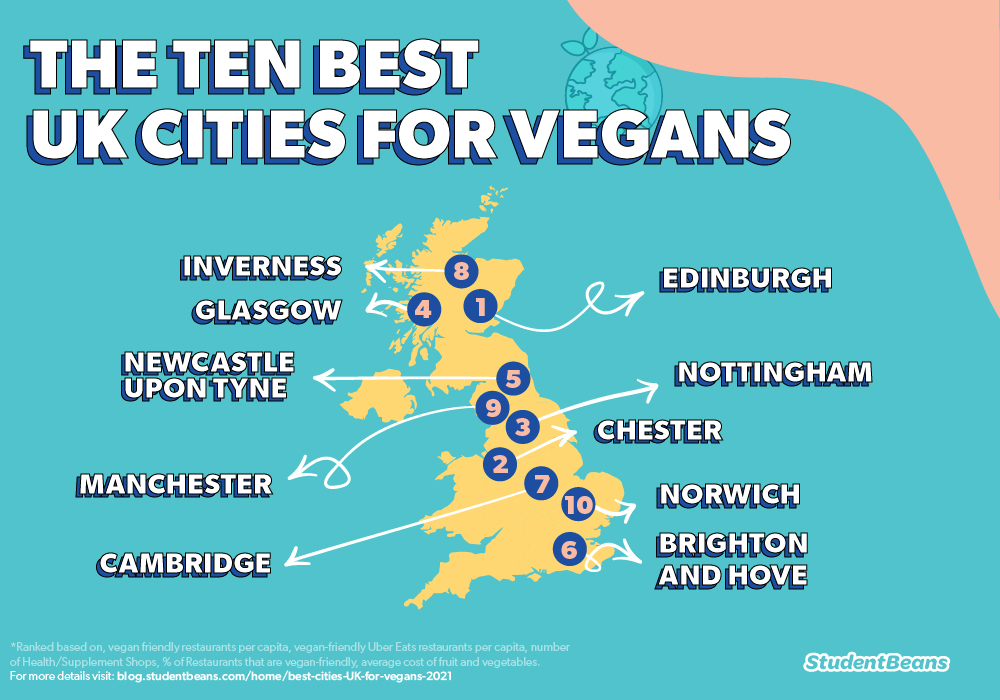 Who knew? Edinburgh is the best city in the UK for Vegans!

Taking the crown for being 2022’s most vegan-friendly city is Edinburgh. With a whopping total of 642 vegan restaurants and 42 UberEats options delivering delicious plant-based food straight to your door, you’ll never be short of a tasty plant-based meal if you find yourself in the wonderful Scottish city.

Runner up: Chester’s lack of Uber Eats cost it the crown

Next up we have Chester, missing out on the top spot for having only nine Uber Eats restaurants delivering plant-based options in the area.

The cost of fruit and vegetables (staples in a vegan diet, we know) is also slightly higher, making Chester slightly less friendly than Edinburgh â€” for vegans anyway.

However, with a total of 135 vegan restaurants to visit in the city, Chester is an attractive place to visit for the vegan foodie.

Surprisingly, popular student cities such as Manchester, Leeds, and Sheffield can be found outside of the top five. With 15% of students reportedly eating meat-free, we were expecting to see these cities doing more to meet the demand for this growing customer.

Haven’t they got the memo that bacon butties are so 2019?

However, Leeds is the best city in the UK for vegan delivery

Despite Leeds ranking as 15th in the country overall, it still provides an impressive 446 restaurants and the highest number of delivery services. With 72 to choose from, veganism foodies definitely won’t go hungry in this city.

Unfortunately, the lack of health food stores available (which are great for finding vegan alternative products) pulls it down the rankings.

Check out how each city scored â€” where does your city rank?

The best cities in the UK for vegans 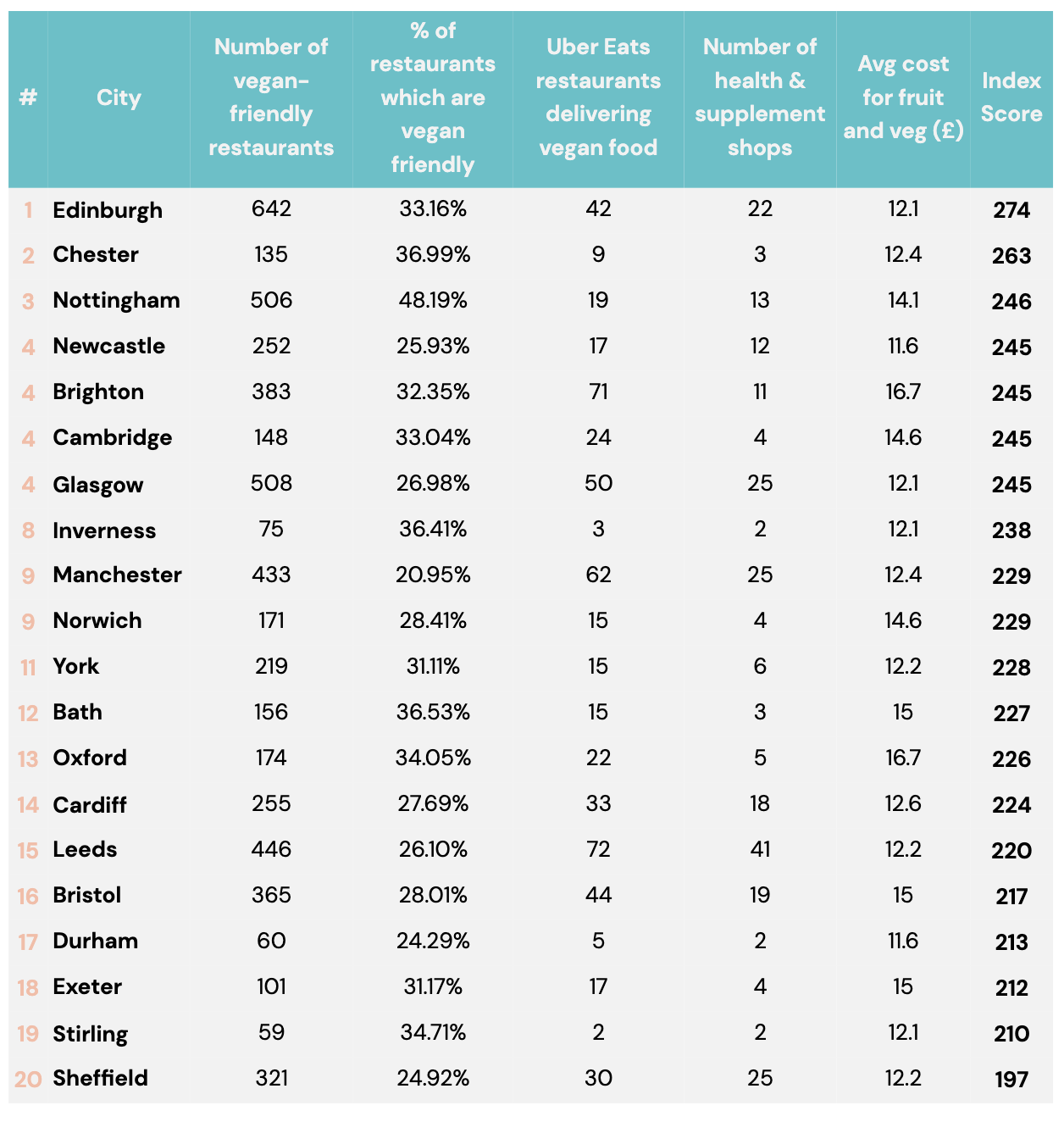 The worst cities in the UK for vegans 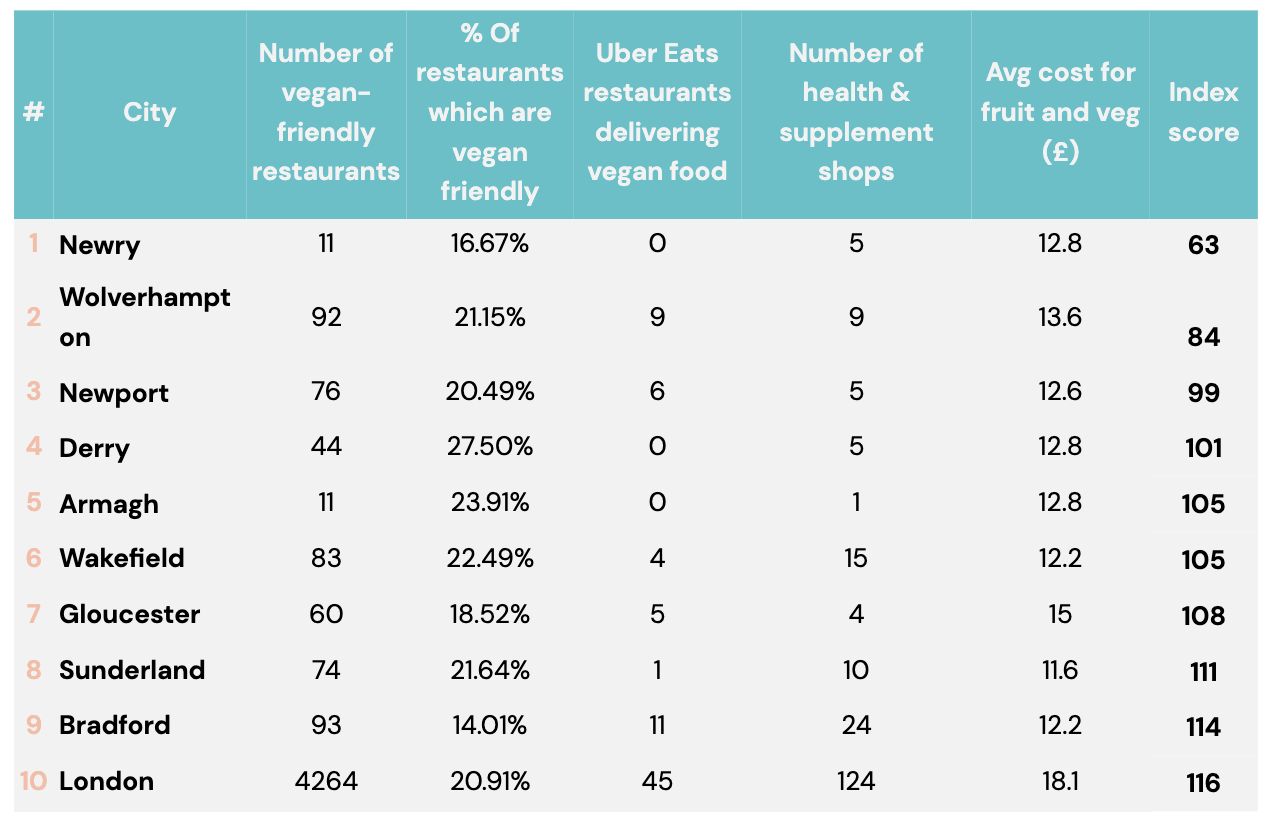 Whilst it’s important to know which is the best city for vegans, it’s equally as important to know the worst. Because well, if you ever find yourself in these cities as someone who strictly eats plant-based, or simply prefers the option, you’re going to need to be prepared.

London (for once) doesn’t come out on top

Whilst it may be a shock to many to see London so far down on the rankings, the city’s costly (£18.1 average) basket spend for fruit and vegetables is a major contributing factor as to why it is so far away from the crown.

Despite housing the highest number of vegan restaurants, Londoners make up almost eight times more of the UK’s population than the second biggest city, Birmingham, resulting in it falling lower down the rankings.

Bradford might be the curry capital, but it’s far from the top for vegans

Bradford on the other hand has fallen into the top 10 worst vegan cities list due to having only seven health food stores and the third-lowest percentage of restaurants that are vegan friendly.

Known as the â€˜Curry Capital of Britain’, we hope to see Bradford become a little more vegan-friendly in the future to bump its way up the list.

The best vegan restaurants in the UK

So if you are a vegan lover and ever lucky enough to find yourself in one of the top five vegan cities in the UK, where is the best place to go? 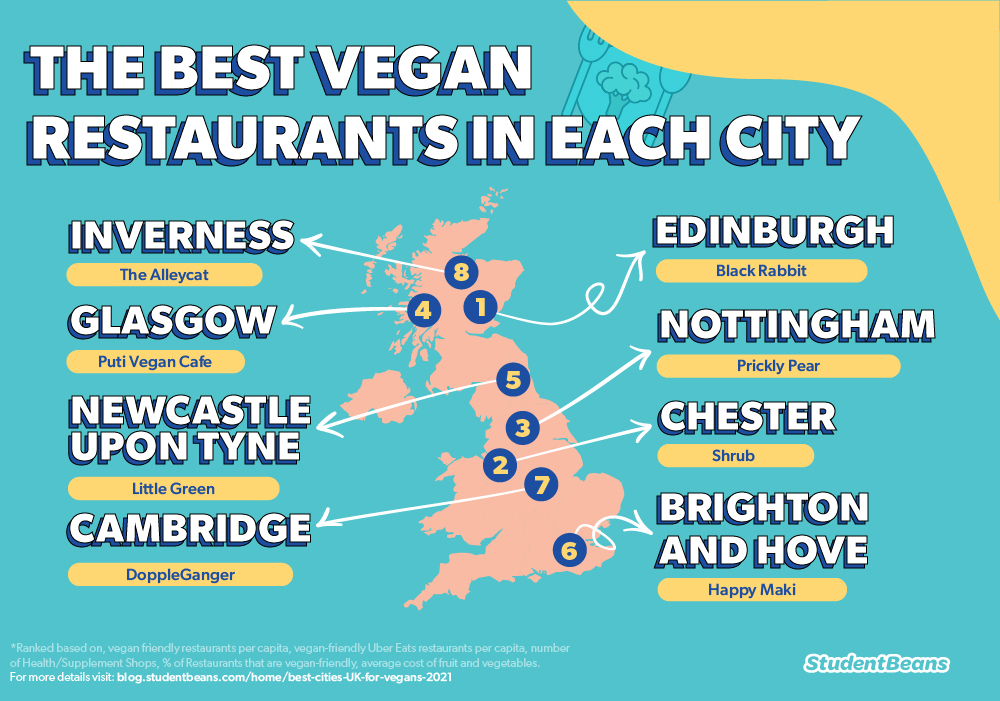 The best vegan restaurants in Edinburgh

If you’re ever in the popular Scottish city, you have to take a trip to Black Rabbit. This quaint, independent deli is the perfect spot to satisfy anyone’s meat-free needs. With vegan meat alternatives a-plenty, in true Scottish style, you can get your hands on vegan haggis (in case you were wondering what it tastes like).

And with plenty of five-star reviews referring to its cakes as â€œmouth-wateringâ€, it’s unlikely you’ll leave the Black Rabbit disappointed.

The best vegan restaurants in Chester

When visiting Chester, Shrub is the go-to restaurant for vegan fans. Its highly rated bacon alternative is renowned across the region.

One visitor describes the menu as â€œimaginative and packed with flavourâ€, making Shrub our top-rated vegan spot in Chester.

The best vegan restaurants in Nottingham

Milkshakes, Mac & â€˜cheeze’, and Doner Kebabs are just a few of the reimagined vegan items on the Prickly Pear Cafe menu. With every item being homemade, this is the perfect vegan restaurant to visit if you find yourself in Nottingham. It’s also suitable for flexitarians, with visitors previously commenting that â€œyou don’t need to be vegan to appreciate the Prickly Pear menuâ€.

The best vegan restaurants in Glasgow

The best pan Asian food can be found at the Puti Vegan Cafe in Glasgow. Dine-in or enjoy from the comfort of your own home – even non-vegan visitors have noted this is the most popular restaurant in the city.

The best vegan restaurants in Newcastle

With 49% of Brits adopting the vegan lifestyle for health reasons according to Mintel, it’s good to see some vegan cafes offering healthier alternatives. If this is your thing, the Little Green Social cafe in Newcastle is the spot for you.

With the likes of Overnight Oats and Pan Fried Artichoke Hearts on the menu, the term plant-based has never rang more true.

For many other vegan hotspots to sink your teeth into, you can find some of our own recommendations here: â€˜Top 10 UK Vegan Restaurants to Try for World Vegan Month’ .

And that’s a plant-based WRAP!

Hopefully, this study has opened your eyes to the wonderful vegan options we now have available in cities you might not have expected. If you’re as hungry as we are just reading this, check out our many discount codes to get exclusive discounts on some delicious vegan food.

To rank the best city for vegans in the UK, we analysed data from a number of factors including:

To make the study fair, each value was calculated per capita, based on the population. 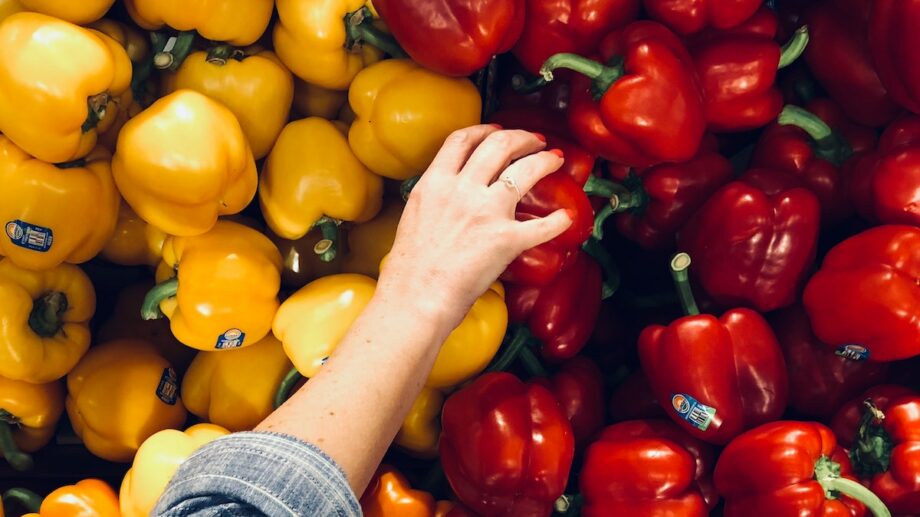 Cook Budget Meals For Only 40p With These Recipes

Get Paid £500 To Drink Gin & Stay In A Scottish Castle

Apply for the Gin-ternship of your dreams. Are you a gin-lover? Then you’ll be pleased to...

Cut Your Supermarket Shopping Bill With These 10 Foolproof TikTok Hacks

Remember to try out these hacks next time you do your weekly shop! Let’s face...